The nuclei at atoms consist of a combination of several different types of particles, on which the most commons are protons (P) that hold a positive charge (+1), and neutrons (N) with no charge. Electrons are another class of particles, which surround the nucleus and balance the proton’s charge.

The atomic number is the sum of the number of protons, which define the elements. For example, any atom containing one proton is hydrogen just as any atom containing eight protons is oxygen. However, atoms of a given element may vary in their number of neutrons. For instance, hydrogen is found with zero, one, and two neutrons, while oxygen is found in forms that contain eight, nine, and ten neutrons (Figure 1). These different forms of the same element are called ISOTOPES.

Isotopes that contain the same number of protons and neutrons show a stable configuration and are the most abundant naturally, as hydrogen (1H), carbon-12 (12C), nitrogen-14(14N), and oxygen-16 (16O). As the number of these particles becomes unbalanced, the nucleus becomes unstable and may spontaneously emit particles and/or energy to rearrange itself to some element more stable. This condition is observed in radioactive isotopes. However, a stable condition is observed when this arrangement does not occur in an unbalanced nucleus, the stability remains and the isotope is called stable.

These statements allow us to conclude isotopes are chemical elements with the same number of protons and different numbers of neutrons, which means they have the same chemical but different physical properties.

Since isotopes have the same chemical properties, they will behave similarly among their peers. However, their distinct physical properties allow their detection in the pool of the compound of interest (tracee), thus qualifying as metabolism tracers. Labels compounds are labeled with radioactive or stable isotopes of one or more atoms in a molecule. An example of a compound used as a metabolism tracer is heavy water labeled with stable isotopes. A water molecule is found naturally (most abundant in the environment) as one atom of 16O and two atoms of 1H. When labeled, heavy water can have one 16O atom and two 2H atoms; one 18O atom and two 1H atoms; or an 18O atom and two 2H atoms, in the latter option, called doubly labeled water (DLW) (Figure 2). 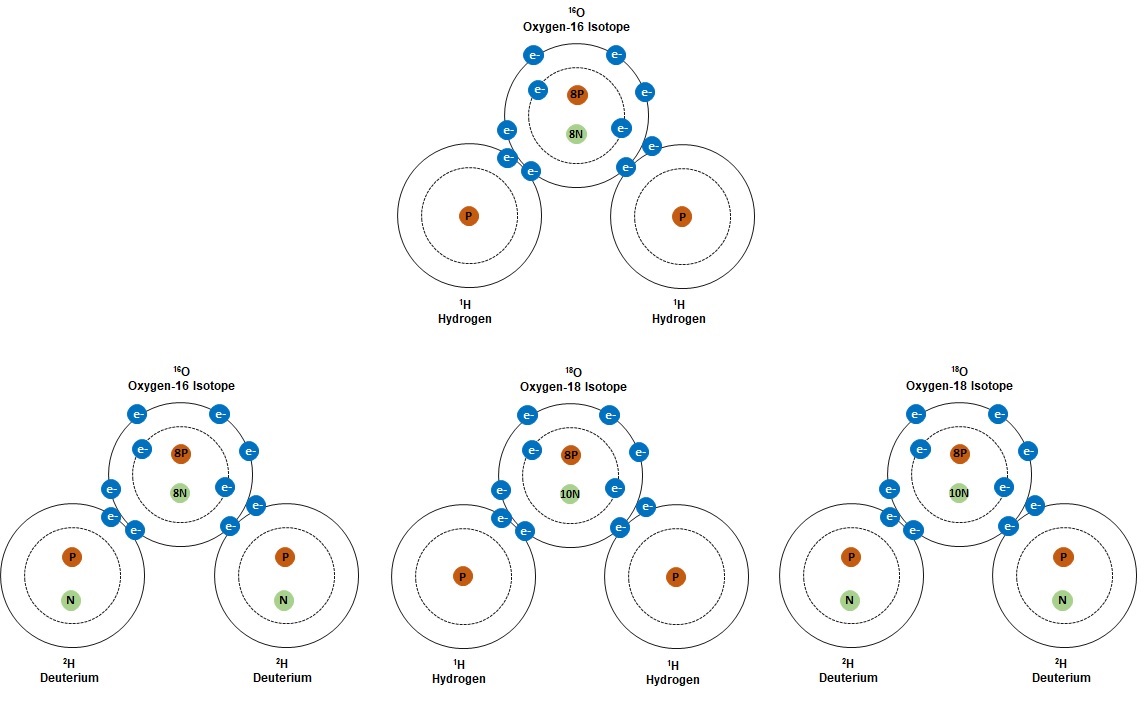 The non-radioactive property observed in stable isotopes is one of the most important advantages of its use as an in vivo tracer, as it presents little or no risk to humans. For mammals, replacing 20% of body water with excess 2H2O can lead to a change in the cell division used by the body to repair and multiply cells (mitosis). However, it is unlikely you could drink enough deuterated water to really be harmful since an enrichment of the total body pool by about 5% is sufficient to raise the enrichment for precise detection. Similarly, compounds of H218O, 13C, and 15N can disturb some cell functions at extremely high levels of enrichment; however, it would never be achieved in vivo study humans.

The unique properties of stable isotopes (no radiation emission) allow them to be used in a wide variety of studies.